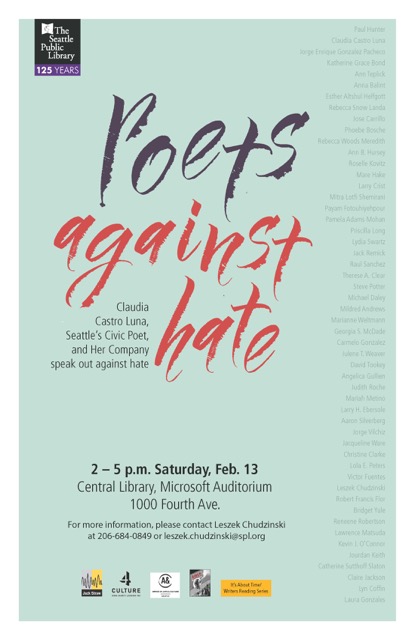 Poets Against Hate took place last Saturday. In all, 52 poems were read by 50 poets over the course of the afternoon, with the occasional musical interlude.

As you would expect from such a large group, the subject at hand was addressed from a variety of angles, from the personal to the political. One poem documented an instance of racial profiling by police. Another spoke of the poet’s experience growing up in the U.S. after having come here from another country. Another celebrated the poet’s neighborhood. Another addressed the continued incarceration of Leonard Peltier.

Number 40 on the program (after adjustments for absent poets), I read my poem I have questions. It was written in response to Charleston, but could easily apply to other events as well. As with my featured reading spot two days earlier, I had plenty of time for nerves to build up; the reading went well anyway.

Those who were unable to attend the event will have several opportunities to catch up. The event was recorded for both a podcast and later airing on the Seattle Channel. In addition, The Raven Chronicles plans to publish a collection of the poems read in early 2017.

The next part of my whirlwind weekend took place just a couple of hours later, as I attended another poetry reading north of Seattle. After two relatively high-profile events, it felt good to read for a smaller crowd and not be the center of attention. Still, having barely had time to wolf down a bowl of soup en route from one place to the other, I was quite tired by the time I got home.

That did not stop me from attending yet another reading the next day—again, more of a no-pressure setting. Since love and Valentine’s Day were the theme of the day, I read a few of my poems on the subject, from the romantic to the silly (I had to end on a laugh).

I spent yesterday’s holiday doing as little as possible. I figure I earned the break.