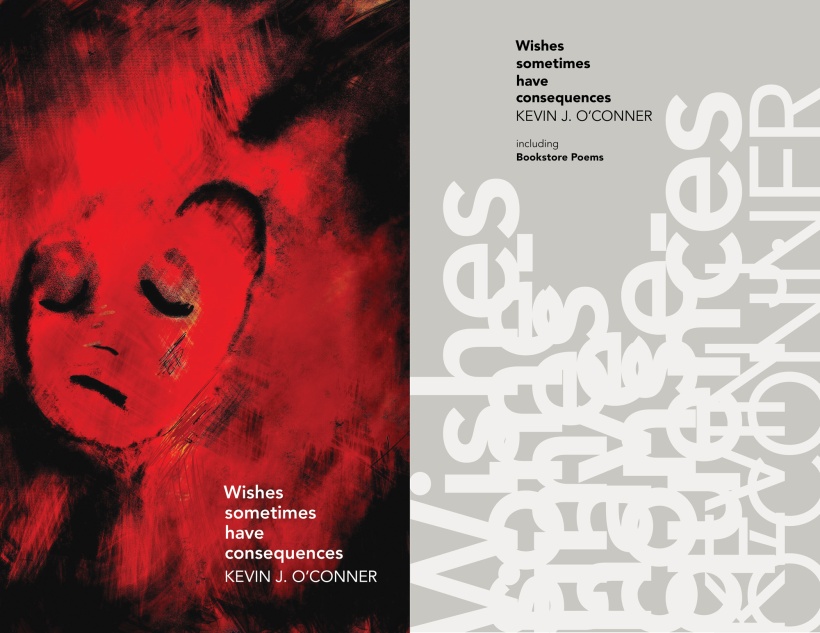 Wishes sometimes have consequences is my twelfth collection of poems.

Over a year in the making, this collection is available in two formats:

(At present, I have not decided whether or not I will create an ebook edition.)

What the book is about

I’m beginning to think I say this with each new collection, but Wishes sometimes have consequences is my most ambitious collection to date. It has also travelled the most tortuous path to completion of any of my books.

I knew before it began that 2018 was likely to be a difficult year—and it more than delivered. I could easily devote several pages to describing how things went, but this is not the place. So here is a summary in bulleted list form:

Through all of this, I write. It proves to be the best way to cope with everything that is happening.

Then there are the bookstore poems. Because they’re numbered, they will stay in that order. And I figure they should be a separate volume—so now I’m working on two books. But there is so much overlap that I eventually decided to include them as a separate section of the same book.

The final four or five weeks of my contract coincide with a larger-than-usual freelance editing project, so I am unable to return to the book until late January. I spend the next several weeks polishing, editing, proofreading, and doing design and layout. In mid-March, the book is done.

Here is my official description of the book (from the back flap of the hardcover dust jacket):

2018
I went into the year determined that things would change. Be careful what you ask for. Some good things did happen—but it felt like they came at enormous cost.

The threads and themes that run through much of my work—love, memory, small moments, scenarios, living with depression, ekphrasis, and the occasional pop-culture reference—are also present in this collection, along with some of my typewriter poems and poems of loss.

This time, however, the poems are presented in mostly chronological order. Because, as they say, life is messy—
and that’s how I experienced it.

Bookstore Poems
After three years of experimenting with form and writing to prompts, for 2018 I chose to change where I wrote instead of how I wrote. The result is a series of poems, written at bookstores and libraries, that tread a parallel path through the year—touching upon many of the same themes, but with subtle differences in perspective and occasional references to my immediate surroundings.

Because I try to write and post new work every day, many of the poems in the book first appeared on my blog, albeit in unpolished form. Here are links to a few of them:

The 2018 section uses original sketches and images in place of the usual section markers. Most of them date from the first few weeks of 2019, since that is when I was laying out the interior pages.

Places to buy the book

Order from your local independent bookstore

Although this is a print-on-demand title, it is available through Ingram (the largest book distributor in the US), so any bookstore should be able to order copies for you. In the Seattle area, some of the better-known indie stores are:

Though technically not in the Seattle area:

If you’re not sure what bookstores are in your area, you can look them up by ZIP code on Indiebound.org.

If you don’t live near a brick-and-mortar bookstore, or travelling is difficult, many indie stores have online ordering options (if not e-commerce, then email). Or, if they can’t order the book for some reason, you’ve always got Amazon and Barnes & Noble as options: